but it’s not! It’s actually flipping hard work and very frustrating. After months of getting out and doing as much as I can – long runs, efforts, little runs, plenty of cycling, feeling guilty if I didn’t quite do as I should – this week (and last week to a degree) I have had to sit around. And you know what? It has turned me into a hypochondriac. First of all I imagined I had a cold that was going to my chest (I don’t – just the usual runny nose I always have in the UK), then I had a pain in my knee, then a twinge in my Achilles and finally yesterday shooting pains all down my right leg. I’m not saying these things aren’t real – just that I wouldn’t usually notice them or perhaps that sitting around doesn’t suit me at all and leads to aches and pains. Or maybe my body is looking for excuses not to run. But it won’t win – I want to run, I have trained for it and am looking forward to it in a rather trepidatious kind of way – and I shall run whatever twinges it sends my way.

Anyway, I have been a good girl and tapered properly. I have done roughly two thirds of my usual weekly mileage both running and on the bike and all of it has been at an easy pace. So I should be fresh and ready for tomorrow!

So this was my week (4-11 October 2014) – I know it’s odd to start a week with a Sunday but in terms of planning my mileage I find it easier to start with the club ride, where I never know how far it will be, than end with it!

Sunday
VCN Club Ride to Goodies!  And what a glorious day for it.  The forecast said it would be colder (7 degrees at 9am, rather than the 17 degrees it had been the previous day) so I had to scurry about hunting down all my winter gear and headed off all layered up.  And I was glad to be warm.  It was perfect cycling weather – full sun all morning and next to no wind.  We had a good turn out for the Club and each of the three groups was large.  Kraig led the Club Ride and we had a very pleasant ride, at a nice steady consistent speed to the Goodies Farm Shop near Long Stratton where I had a very large and tasty sausage roll (49.5 miles at an average of 16.9 mph, average HR 133bpm).

Monday
I did the first of my three taper runs – a nice flat 3 miles from home. This was when I convinced myself I had a cold. The run felt hard even though I was trying to go slowly. Mostly it felt hard because I wasn’t going quite as slowly as I planned and also because I never feel good running in the morning. For me, running is always so much easier in the evening. But I mustn’t say, or even think that, because of course the half marathon is in the morning! (2.9 miles at 9:34 min/mile, ave HR 143bpm)

Tuesday
Second of my taper runs – a very similar run to the one yesterday but this time I went out in the evening.  It was after this one that my knee felt twingy although it was fine whilst I was running. (3 miles at 10:05 min/mile – got the pace just right this time – ave HR 138bpm).

Thursday
The third and final taper run.  Nice gentle run/walk from Club.  Linda and I discussed how we would NOT set off too quickly on Sunday. We plan to run a nice steady 10 minute/mile pace throughout but we are both prone to setting off faster, chatting merrily and not noticing.  Hopefully the congested start will ensure we keep our pace down. Poor Linda has had a bad cold so has been forced to rest up even more than she intended.  This time it was my Achilles (coming out in sympathy with Sally) that twinged a bit after the run.  But again it has been fine since! (3.1 miles at 11:31 min/mile, ave HR 127bpm)

Friday
You’ve guessed it – rest day. The day of the shooting pains in the right leg. I have never had anything like these before. They only last a second or two but were quite bad. But I know if I get them on Sunday (and they seemed to disappear when I went out for a walk so hopefully they are a result of too much sitting) I can just stop briefly til they pass and then carry on.

Saturday
The Day Before!! And so far all my pains and other imagined ailments seem to have disappeared. I shall have a nice restful day, pottering about doing chores and going for a few very short slow walks. And I must get my stuff ready and make sure I eat good foods and not drink too much wine tonight.

I do feel a bit nervous but mostly just excited. It is always good to do events as part of the club and once tomorrow arrives and I meet up with club mates I will be fine!

One thought on “I thought tapering would be fun” 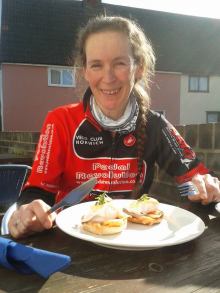