I do believe I am getting a bit faster.  There was a time when running at a pace below 8 minute/mile was something I could only do for a very short time – as a short effort perhaps.  But over the past few months I have gradually extended the distance I can hold that pace for and have, in several races lately, found myself covering the final mile or two at that pace.  I think it is the Club Efforts sessions that have helped with this, plus trying really hard not to go off too fast in races.  I have run negative splits on several occasions recently and that definitely feels better than running out of steam 2 miles from the finish.

During May I ran PBs at:

Then yesterday I ran Catton parkrun in under 25 minutes for the first time (24:47mins). 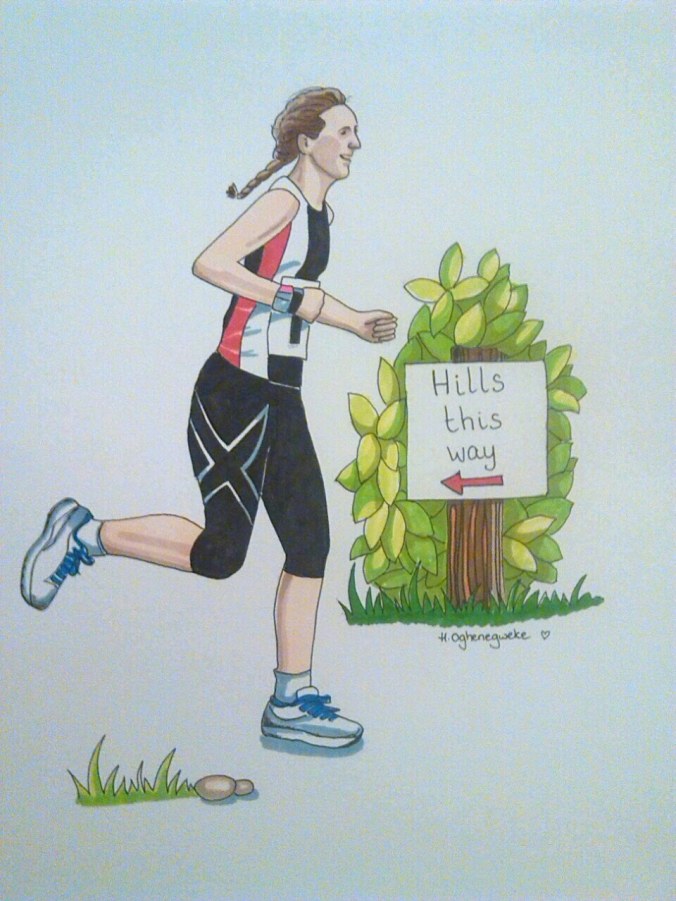 Me avoiding hills – love this pic by the wonderful Helen Oghenegweke

There is a common theme to most of these PBs – they are on flat courses.  Aberystwyth, Great Yarmouth and GEAR were pancake flat.  I find it so much easier to pace myself and finish strongly on a flat course.  So it is encouraging really that I am getting faster at Catton as that is a hillier course.  I think hills are probably something I need to tackle a little more.  I need to venture to some of Wendy’s Mousehold sessions and push myself a bit now my ankle is definitely mended.

Running is feeling good at the moment.  It isn’t just getting PBs, I am just really enjoying it – whether it is a race, efforts at club on a Tuesday, a run and a catch-up with Jess or a long slow chatty run with Linda, Lynn and Sophie.  I am loving them all.

And that is how I want it to stay – a nice mixture of chasing PBs, pacing other people and just running for fun, plus a couple of rides each week on the bike, of course!

May was a month of PBs for me!  First up, was a fabulous PB at the 10k distance.

I had it in mind to try and get a good time at the GEAR run in King’s Lynn as it is a flat town centre course with great crowd support.  My ankle was recovered and I felt good so it seemed realistic to aim for sub-53 minutes (to get the club gold standard) with the possibility if I felt particularly strong of going sub-52 minutes.

The day did not start well as it was pouring with rain for our half hour walk to the start and then we hung around for ages getting wetter and wetter as the start was delayed.

Sally and I, waiting in the rain to start the race

The first mile was slow as many people had started in pens where the pace was too quick for them and then others were prissy about getting their shoes wet (even though they had been standing for an hour in pouring rain!) and the pathway was narrow so it kept surging forward and then stopping suddenly when a Prissy Person encountered a puddle and tried to go round it.  This stopping and starting made me nervous about my ankle.

But after the first mile people spread out and I got into my stride.  I knew that to get the time I wanted I had to average 8:15 minute/miles and, with a 9:08 minute first mile, things were not looking promising.  But I kept targeting runners ahead and picking them off one by one, running behind them for a few seconds and then overtaking when I felt comfortable.  My pace felt manageable at just over 8 minute/miles.  Starting further back than I probably should have done, and having a slow start meant I overtook a lot of people in the middle part of the race which is always good for morale.  The rain had slowed to a drizzle which was nice and cooling and there was little if any wind.  The crowds were, as expected, fantastic and it makes such a difference to get cheered on, even by strangers.

By the beginning of the final mile I did feel tired but I wasn’t sure I’d get the time I wanted unless I made one final push and, knowing there were no hills, I managed a 7:41 minute/mile which was a good effort at the end of a 10km race and not something I could have done a year ago.

My finishing time was 51:13 minutes, a PB and well under the 53 minute target I had set for myself. The medal was great and it was good to watch Sally and some of her club mates finish and to have a brief chat with Roly who had also run a really good time, although he too had had a slow start in the crowds.

All finished – with our bling!

Delighted with my PB, we retired to the pub to strip off all the nasty wet clothes and then drink much beer and eat a rather large meal!  A great day!