Last weekend I completed the Dunwich Dynamo – a 116 mile overnight cycle ride from London Fields in Hackney to the Suffolk coastal village of Dunwich.

The Dunwich Dynamo is not a Sportive: you don’t have to book a place or pay to enter, you just turn up on the designated day at London Fields and ride through the night, with a couple of thousand others, until you reach the sea.  It’s held every July on the Saturday night closest to the full moon.

The four of us (me, Alan, Roly and Sean) from Velo Club Norwich caught the 4pm train (travelling first class for a mere £11), getting there plenty early enough to be sure there would be space to stash our bikes in the guard van.  We needn’t have worried, our bikes were first on but there was plenty of room for the other Dynamoers boarding the train. 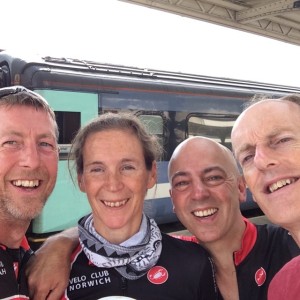 Once in London, after a rather scary bus-infested ride from Liverpool Street station to Hackney we had to carb up, of course, so found a place somewhere in Hackney where we could tuck into rather tasty burgers and chips and a much-needed beer.  It was warm enough to sit outside within sight of our bikes and people-watch. 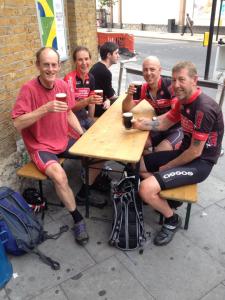 Then we were off.  The weather report was for rain at some point – probably heavy rain!  As we rode out of East London into Essex the roads were awash and lake-like puddles stretched across half of the carriageway in places.  When we stopped after about 33 miles the landlady of the pub (yes, more beer was needed) told us we had just missed a massive thunderstorm and heavy rain.  We had been lucky!

And we continued to be lucky all night long – there was rain both in front of us and behind and lightning flashed around us for hours on end, but not a drop of rain fell on us until we were loading the bikes into the car at Dunwich.  But I’m getting ahead of myself.  It was more than 70 miles from that pub to Dunwich!

I had been a bit anxious about this ride beforehand but I think it had been the distance (it was to be my longest ride to date) and the fear that I might fall asleep at the handlebars that had concerned me most. What I had failed to consider, because I have never cycled at night out of the city, was just how dark it is.  The vast majority of the ride was through the countryside – villages and towns with streetlights were few and far between.  The night was cloudy so Supermoon there may have been but we never saw it.  We had lights of course, and I was never on the front, but nonetheless I wore out my brake blocks on the descents – so petrified was I of hitting an unseen pothole or skidding on some “loose”.  It was difficult for Sean and Alan on the front to shout out warnings far enough in advance for Roly and I to avoid things and I did go through one massive pothole (the same one that punctured both tyres  of another member of our club who was riding in a different group) and was lucky to be able to ride on unscathed.  Perhaps a daily dose of carrot cake for several weeks before the ride would have improved my night vision – definitely something worth considering for next year. At least the fear kept me from feeling sleepy.

There was one official stop, just before Sudbury, at about 60 miles.  This was packed with riders (not many ladies though) including a huge contingent from Dulwich, and there was plenty of food you could buy.  I didn’t feel hungry but decided it would be sensible to take on some calories.  I had a banana and bought a flapjack and some soup and a roll.  The soup was spicy and after a couple of spoonfuls I really couldn’t face it.  It was, after all, the middle of the night, and when we set off I felt like I might vomit at any moment for most of the next 30 miles or so.

Riders at the official stop

Alan had the route programmed into his Garmin 800, which was set to light up at every junction so he could easily see which way to go.  People had also marked the junctions with candles which was a nice touch and of course there was a steady stream of blinking red lights from all the other cyclists ahead of us so that we never really had to worry about getting lost.  And there were plenty of yellow bikes dotted along the way as the Tour de France had passed along part of the same route (in the opposite direction) only a few days before.  We did get separated on one occasion.  Alan and Sean decided to attack a hill (it’s the only way to get up long hills on a single speed) whereas Roly and I were too feeble for such moves.  We got to what we thought was the top and stopped but Sean and Alan weren’t there.  They were further on at a different top.  It’s hard to find people in the dark and hard to judge gradient other than by leg pain.  Cyclists were whizzing past us the whole time but it was impossible to see if any of them were Sean or Alan.

We stopped for the last time at the burger van (by a lake and with some loos) at about 90 miles.  None of us felt like eating but I swigged down a can of coke, and had a much needed wee.  And then we were off on the final leg.

The roads near the end were quite difficult – narrow country lanes with a lot of gravel and muck – and whilst it was beginning to lighten a little we still couldn’t see very far ahead.  The much talked about sunrise didn’t really happen – there was a dawn mist over the fields – but to be honest I was too busy scanning the road ahead for hazards to get sidetracked by pretty mists.  I think the low point of the ride, for me, was when I thought I was about 2 miles from Dunwich and glanced up a junction to see a sign that said “Dunwich 7”.   Now an extra 5 miles probably doesn’t sound a lot but after more than 100 miles, I tell you, it feels like a marathon.  My heart sank and I was not at all chatty for the next 4 or 5 miles.

But we made it.  At about 5am we rolled into Dunwich, dumped our bikes on the beach and went into the cafe (which had already been serving breakfasts to riders for well over an hour) and queued for our coffee and breakfast. To complete the experience fully we should probably have gone for a swim in the sea.  But the sea looked a long way off across the shingle and the cafe and breakfast was so very much nearer! 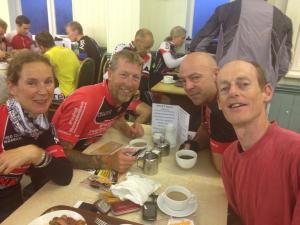 And then Roly and I drove home and Alan and Sean climbed back onto their bikes, in the rain, and rode the 33 miles back to Norwich.

Thanks to Alan and Sean for riding on the front virtually the whole distance (yes, Roly, I know you did do your bit!!) and to Roly for chatting to me for hours on end (when I probably wasn’t particularly lively company!) and for passing me jelly babies and fig rolls at regular intervals.

(Photos by Sean and Alan)